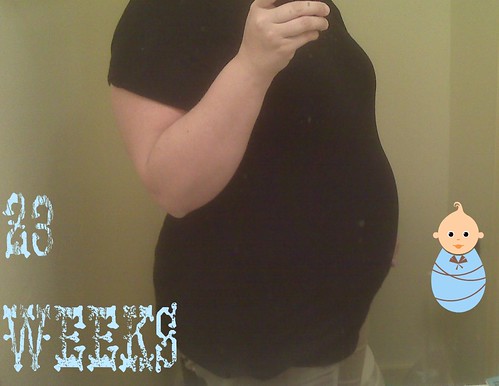 {belly pic taken at 23wks0days…and I swear I clean that mirror. I blame the kiddo. He likes to play in the sink!}

Sleep: Let the weird pregnancy dreams begin! They are really starting to freak me out a bit. They seem so real. I had one that I was convinced was true and the hubster had to calm me down and tell me it wasn’t. I still didn’t believe him. Not only do they feel real, but they have been really bizarre {think people being murdered and kidnapped}.

Names: For now we are going with Barracuda.

Feeling: I am so over things {like work and caring about anything}. I remember with E it took me a while to get to this point. I don’t know if it’s the anticipation of everything or hormones {or both} but let’s just say I’m over it.

Health: Still having the Braxton Hicks contractions but not as many. I have been taking it easy when I can and that seems to be helping a lot.
Movement:  This child is reliable! Every night 8 pm there’s a party in my belly. The hubster was able to feel him the other night and E is anxiously waiting to feel him as well. He’s always asking me if the baby is kicking me.

Cravings: Thanks to Jenni, I really wanted a burger last Friday {and I got it!}. The mac and cheese obsession has calmed itself down {still eating it, just not as frequently}. I basically just want whatever sounds good at the moment and I don’t stop until I get it!
Next Appointment: February 7th