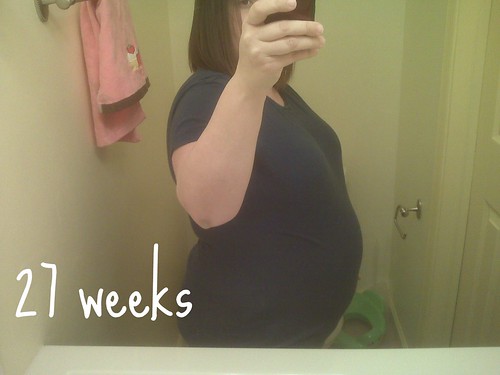 Sleep: The dreaded charlie horses are back. If it weren’t for them, I would be sleeping fine. This just means I need to get back to having a banana a day. This really helped when I was pregnant with E.

Feeling: Exhausted. We did so much this weekend. My job this weekend was to keep E out Mike’s way while he worked on his big boy room {more on this later}. Poor kid just wanted to help!

Health: Last Thursday, I was not feeling so hot {crampy, uncomfortable and hot!}. After trying all the tricks to get rid of the cramps, I called the doctor. I was ordered to go home, put my feet up, and drink a ton of water. I had my glucose test the following day so they called the office to see if a doctor could see me while I was there. Thankfully, they had an open spot for me!

After I downed my nasty orange drink, they hooked me up on a monitor to watch the contractions. The doctor came in after about 15 minutes to review the results. I was in fact having contractions {very teeny, tiny ones}. He then did an ultrasound to make sure that nothing was going. Everything looked great! I even got to see the little guy again. As soon as he came up on the screen, the doctor said “Wow, what a big boy!”. Baby boy is measuring 2 weeks ahead and has very long legs {guess he won’t be a shorty like his big bro}.

The doctor than delivered the diagnosis. Ladies and gentlemen, I have an irritable uterus. I started laughing when he said this and said “Sounds about right.”. He went onto explain this is the reason why I get a lot of contractions, round ligament pain, and discomfort. Unfotunately, this is something I am going to have to deal with until I deliver. He told me what to look out for and to rest whenever possible.

Cravings: Last night, I had a craving for hot waffles and ice cream. Now do you think the hubster went out and got me all the ingredients? Nope! Looks like I’ll have to do it myself later.