We are officially in the throes of the terrible two’s. Hello screaming “No!”, spitting, hitting, and just plain being nasty. Goodbye sweet boy! I am sorry but the terrible two’s are just not welcome here. They need to leave…soon (but I hear that 3 is worse than 2. How is that possible?).

We have exhausted just about every discipline technique we know of.

But lately, all it takes is for the hubster to say “Do I have to get up?” and that kid immediately starts doing whatever it is he’s supposed to be doing. It gets his attention. Unfortunately, it doesn’t work when I say it. He just laughs at me. I’m convinced this kid thinks I’m either a) a pushover, 2) a softy, or iii) both. And maybe I am…a little.

The hubster has always said that he was going to be the good guy and I would be the disciplinarian. Boy was he wrong! I was afraid that since he wanted to be the good guy, or “best buddy”, that I would be stuck being the Meaniest Mom on the Earth. And who really wants to have that crown?

Although, ask him when he’s about 13 and I’m sure I would win that contest hands down. 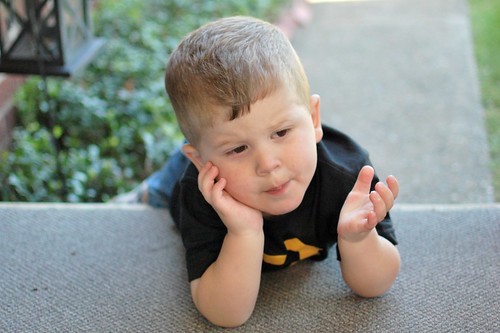