You are here: Home / Home & Family / Do the Potty Dance!
0shares

I have been holding off on sharing the good news because I knew it would jinx us. But now I know it’s official. E IS POTTY TRAINED!!!!

We started our potty training journey back in December when I was off for a week after the holidays. It was touch and go. He was kinda interested and I didn’t want to force him. I didn’t want to make using the potty a bad experience. So instead, we just took his lead.
We really wanted him to be potty trained before B arrived but you know the saying “Best laid plans.” We knew even if he was trained by the time the baby came, he would regress some. So again we took his lead.
And he did it all on his own.
I have to say taking this approach {even though it took some time} was the best for us. No stressing. No crying. No being afraid of using the potty.
So how did we do it?
1. I gave in and did the Pull-Ups

. I swore we wouldn’t use them but we did. They worked well with E because he called them his underwear. He didn’t see them as a diaper. When he would accidentally go in them, he would freak out and asked to be changed. He didn’t like the feeling of being wet all
2. We got the Fisher Price Frog potty

. E loved this! It is really good for boys because it has a nice high splash guard. He rarely got any out of the potty which helped keep him from getting discouraged. 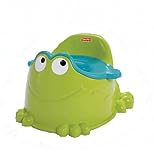 3. The hubster showed him how to pee standing up! Honestly, this really helped. He thought it was hysterical and couldn’t wait to do it again…and again…and again. We did put Cheerios in the toilet for him to aim. That only lasted about a week and then he declared he didn’t need them anymore.
4. Going #2 on the potty was the tricky part {which usually is}. I don’t think E liked that his feet weren’t touching the ground and hated sitting on the toilet. He would ask for a diaper when he had to go and for awhile we just let him do it because we were focused more getting him to pee consistently on the potty. Then I found the Fisher Price Turtle Potty ring. I don’t know what it was about that but it really helped!
5. We rewarded him with chocolate. I really didn’t want to do this either but hey, it worked. We have phased out the rewards at this point and he doesn’t even ask for them! Except…
6. He gets a “tattoo” for going #2. I don’t even know how this started but it did and it worked. We are currently phasing this out {mainly because we are almost out of tattoos}.
I must say potty training E was a lot easier than I had an anticipated. We got lucky!
What are/were your helpful tips or tricks when potty training your child{ren}?