You are here: Home / Home & Family / The Dreaded Phone Call
0shares
Every day I keep my phone right by my side in case of the phone call. I don’t know why I expect the worse to happen but hey it does happen.
Yesterday was one of those days that I happened to not have my phone super glued to my side. Being the last day of work before spring break, my co-workers and I went out to lunch. I had my phone on quiet and didn’t hear it going off. When we got back in the car, I was checking e-mails, facebook, etc. and noticed that I had a voicemail.
I hate to admit this but I rarely check my voice mail. I usually only check it just to get that annoying envelope icon off the screen. Thankfully, I checked it right away this time.
It was daycare.
Normally when they call they start off with “Hi, it’s so-and-so daycare, E’s fine…”. But not this time. The message simply said “Hi, please call us immediately.”
I called them right back. By this time, they had gotten a hold of the hubster and he was already on his way. But it was going to take him over a half hour to get there. I called the hubster and told him that I would get E and he should meet me at my office.
Poor E. He had his finger pinched in a door. And I could hear him crying in the background. As soon as we got in the parking lot, I hopped out of my co-worker’s car and right into mine. I was there within 5 minutes. By the time I got there, he had calmed down. He showed me his boo-boo. E has fat chubby sausage fingers but his poor pointer finger was so swollen he couldn’t bend it and it was purple. Purple!
Not only did the poor thing have a bum finger, but his ear was leaking a really nasty liquid. As soon as we got in the car, I called the pedi and headed back to my office. I am so glad that I picked a pedi that is literally right next door to my office.
At the office, all the women were giving him love. Someone got him ice, another brought him a Krispie Treat. By the time, the hubster got there, he was running around and drawing all over my whiteboard.
We were still waiting for a call back from the pedi and I was being a little impatient (shocked, I’m sure). Since they are right next door, I decided to just head right over.
And I’m so glad I did.

They took him right back. The nurse was impressed by his oozing ear and felt so bad for his finger. They weighed him (31.2 lbs, I swear he’s more and their scale is wrong) and we were sent into the exam room to wait for the pedi. After about 5 minutes, he came in, E’s favorite doctor!!

He started with the finger first. He said that it didn’t appear to be broken and was “appropriately” swollen. We just have to keep an eye on it and make sure the swelling goes down (which it has a little). Then on to the ear. He checked the non-puss draining ear first. Yup, definitely infected and ready to pop. He didn’t even have to check the puss ear. It was definitely infected and had popped, along with his ear drum.
You would think a child with a double-ear infection and ruptured ear drum would be a miserable beast and complaining about it. But not my child. He has atypical symptoms and the finger seemed to be bothering him more than anything.

This morning he was his normal self. He’s walking around favoring his hand with the bum finger but you would never know he has a double-ear infection.

And for that, I am thankful. 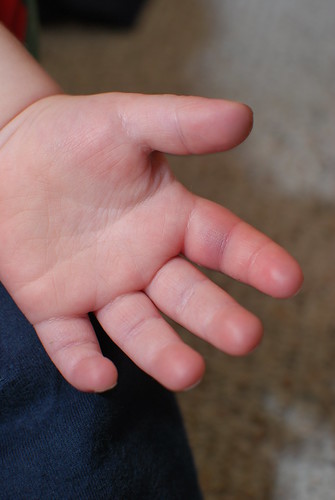