Last night, hubster wanted to go to Home Depot. He had the brillant idea that we would start redoing our bathrooms (we have 2.5). When we moved into our house 3 years ago, everything was practically brand new. The previous owner had bought the house as a foreclosure, gutted it, re-did almost everything, and then sold it. We basically got brand new construction on the inside of the house.

Eventhough everything was new, it wasn’t the best materials. After living in the house for 3 years, we can start to see where they skimped on things. All the vanities in the bathrooms are “contractor” vanities, the floors are horrendous, and the toilets wobble. I swear I feel like I am going to tip the one over everytime I go to wipe.

We walked around the ‘Dep and picked out what we wanted. Hubster is convinced this will only be a weekend project. And he thinks he can do it all on his own. We shall see.

Here is what we are thinking: 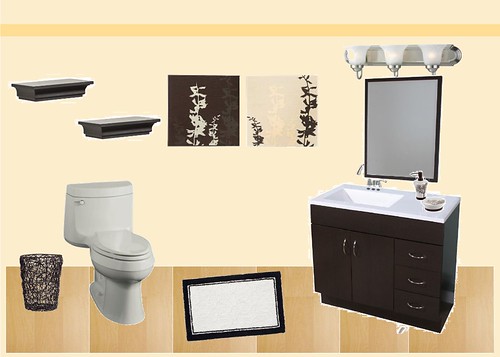 The room is small and narrow so we can’t do anything dramatic. I’m actually shocked that he agreed on an ebony vanity. When it came to the toilet, I let him pick it out. I don’t know the first thing about picking out a toilet except for if it’s comfy. But you can’t test them out. They have them up on the second shelf on an angle for you to look at. I mean how are you supposed to pick out a toilet without sitting on it? I pointed one out that I liked but of course it was the most expensive one. What can I say, I have great taste. Nothing but the best for my tush!

Hubster is starting demolition as I speak. He plans to take everything off the walls and prep so that he can paint tomorrow morning while E and I are at the zoo. I am a little nervous about him doing the sink by himself but I gotta stand by man. Even if it is to watch him fail.