I promised an update on the bathroom so here it is!

The demolition went smoothly! I was a little nervous about this part. The vanity that was in the bathroom was really in there (36 inch vanity in a 36 inch opening). After a little wiggling and banging, the hubster successfully got it out. He took all of the fixtures out and lastly, removed the toilet.

Then it was time to take the floor up. BIG MISTAKE! The builder before us had the brilliant idea to not only glue the new floor down to the floating floor but to ALSO glue that onto the subfloor. Needless to say, that old yucky floor wasn’t going anywhere. But it was ok. The hubster said he would just level off the floor and put the laminate directly on top. Which he did, and it looks great. He then patched up the walls and got them ready for painting.

The following day, E and I went to the zoo. While we were there, hubster got the room painted and the floor put down. I love the color we choose. At first, it looked a little too yellow but with the light in there now, I really, really like it. We had a party to go to later in the day so hubster called it quits after the floor was done.

Day three would prove to be not as successful as the previous two.

Hubster got up early and met his brother at Home Depot to pick up the vanity, toilet, and all of the little odds and ends. When they got back, they took the vanity out of the box. Disaster! Huge, HUGE scratch across the front. A little grumbling and few choice words later, the vanity was back in its box and they were back in the car headed for the ‘Dep.

Let’s try this again. They get back from returning the defective vanity and they start working. My brother in law started painting all of our trim pieces while the hubster worked on the light. E and I went to my sister’s to get out of the way so I had no clue what was going on. When we arrived home, the bathroom was looking to be in pretty good shape. The trim had been painted, a second coat paint was on the walls and the light fixture was up. Hubster was in the zone and continued to work while E and I ate dinner and played.

And then we heard it. The big bang! The big crash! The long string of expletives! E and I went up to investigate. It wasn’t pretty. This is what we saw: 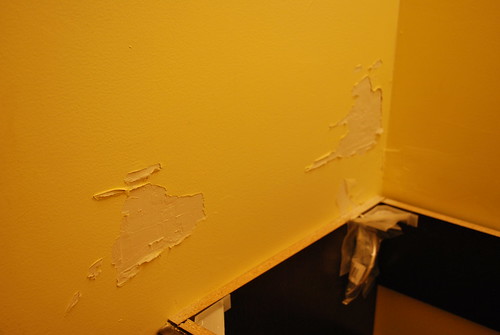 That nice pretty paint was now hanging off the wall. What happened? Wrong question to ask. I knew someone should have helped the hubster put in the vanity. Remember, he was trying to squeeze a 36 inch vanity into a 36 inch opening. Talk about a tight fit. But it doesn’t stop there. After he had gotten the vanity in, he tried to put the top on. And it cracked.

Hubster decided to give up for the night and would “figure something out” (which, by the way, he still hasn’t).

So here I am, a week later, and the project that he swore would take a weekend is still not completed. He did get the toilet put in with ZERO problems. Which surprised me because this is what I was most worried about. So at least I have a working toilet in there and I don’t have to run upstairs every time I have to go, which is about every fifteen minutes.

Oh and we have to be two of the dumbest people out there. It took us until THURSDAY to realize that we won’t be able to open the drawers. They can only open up about an inch before hitting the molding around the door. Hubster has a great idea for that one (I’m not too thrilled about it).

Anyone wanna guess how long it’s going to take to get the bathroom finished?