Another installment of Friday Fave Five! 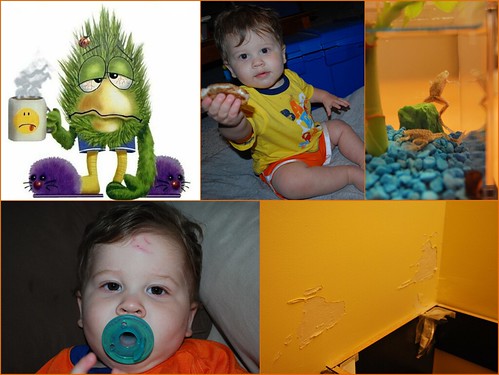 1 – I’ve been feeling under the weather lately. Not sure what it is, but I just don’t feel right. Tired, nauseous, lack of appetite, really weird taste in my mouth. And NO I AM NOT PREGNANT (at least I don’t think I am).

2 – All weekend I had to keep E out of the bathroom while the hubster was working. We (me) decided to have a picnic in the basement. He was so cute sharing his grilled cheese. We definitely need to do that again (and often).

3 – E is still totally in love with his frogs! It’s so cute to see him show them off. I hope they last a while.

4 – When I went to pick E up at daycare on Wednesday, he had a boo boo. He fell on a Lego block. He was such a trooper though! When I got there, he was laughing and pointing to his head. It was as if he was proud of his battle wounds.

5 – ::sigh:: The bathroom. It was going oh so well. The demolition part was easy peasy. The installation not so much. So far I have a working toilet but that’s it. More on this later.