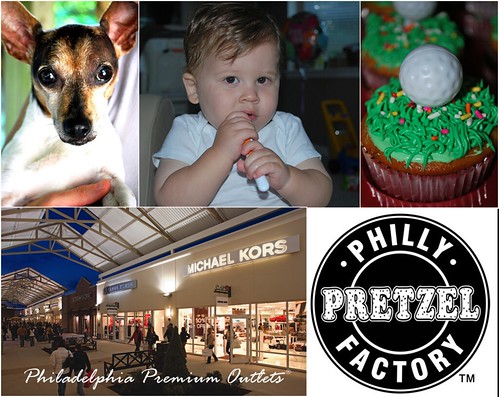 1 – Another succesful photo shoot! Sunday, I had the honor of taking pictures of this sweet girl and her family. To see more pictures, head on over to sg.photography.

2 – My little man is getting so big. He loves to brush his teeth. As soon as he sees the toothbrush, he gets all excited. He does a pretty good job too. He would sit and brush his teeth for hours (not that that’s a bad thing).

3 – I don’t know why I open my big mouth sometimes. My sister wanted to make cupcakes for my niece’s birthday party instead of buying them (they get pretty expensive). I told her that I had the tip to make grass and could do them for her. It’s not that they were hard to do (once I got into a rhythm), it was just time consuming. But I have to admit, they do look pretty darn good. I was so sad to see the kids dive into them and destroy all my work!

4 – I love the outlet (who doesn’t, right?)! E needs a ton of fall clothes. He had nothing before we went. We didn’t get much but I was able to score last year’s long sleeve t-shirts from Carters for only $1.99. Not too shabby. The outlets are so close to our house, it’s dangerous. I could go there every week. But I do practice some restraint….I only go every other week!

5 – I had been craving a nice, hot, soft pretzel for the longest time. And there’s only one place to get a good one: The Philadelphia Pretzel Factory (that is, if you aren’t in the city). I stopped there on Tuesday for lunch. And it just so happened to be Dollar Dog Day! I love the pretzel dog. It’s such a genius concept.