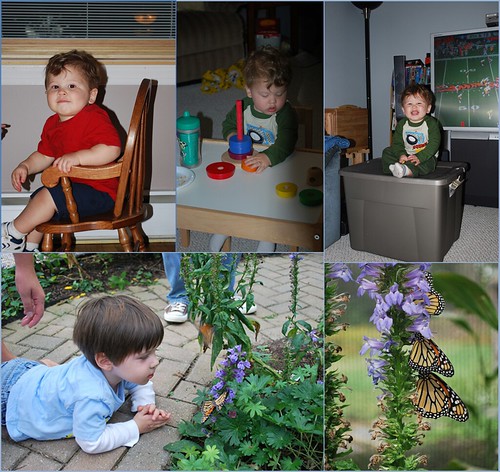 1 – E loves rocking chairs! He will fight you for it. He proved that the other night at my parent’s. Adriana was torturing him with it and wouldn’t give him a turn. When she finally got off the chair, he ran right for it. The whole time he was rocking, he was saying her name, taunting her. She was in time out for being mean to him. Don’t mess with his rocking chair!

2 – On Sunday, we went to IKEA to get E a table and chair set. While he was napping, the hubster put it together. I would say its a big hit. For the rest of the day, he had to do everything on that table: have a snack, play with his toys, etc.

3 – When he wasn’t playing on his new table, he was busy climbing this tub that’s still sitting in the middle of the basement (thank hubster!). He was getting such a kick out of it. We are knee deep in the climbing stage.

5 – The butterflies. I got such great shots while we were there. I’ll post more later.