Last Friday, we took E to the local Strawberry Festival. He had a blast riding the rides and pigging out on fair food (and so did mom!). As we were heading out, we stopped at the fish pond game. Never in a million years did I think he would be able to get the ball in the little fish bowl. As always, he surprised us and did!

And so, we left with a goldfish.

The hubster is such a softy. I casually mentioned going out the next morning and getting a suitable home for the new fish. Well, we couldn’t wait for the morning. The hubster pulled off at the next exit and before I knew it we were making our way into PetSmart.

E was fascinated by all the fish in the tanks. I don’t know why we bothered paying to go to the aquarium (more on that later). We should have just taken him to the pet store. While he was occupied, we picked out a small desk tank. E was allowed to choose one “toy” for his fish. Surprise, surprise, he picked out a Nemo one.

When we finally got home, we set up the tank and the fish was happy in his new home. He was passed on the couch so he had to wait until the morning to see his new pet.

The next morning, we showed E what we had done. He is so fascinated by his fish. He has taken on the responsibility of feeding it. He likes to yell at the fish to eat.

So what is the fish’s name? I don’t know why but E has been calling it Willow. Oh and he will let you know that it’s a girl fish not a boy fish. Thank you very much. 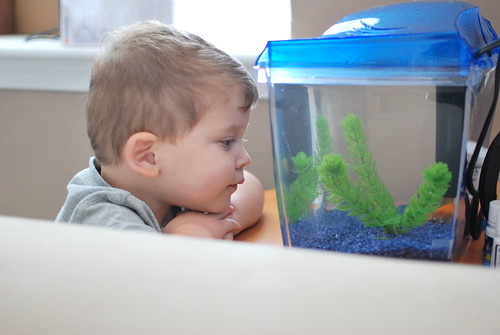