The hubster and I had been kicking the idea around of getting E a pet. We aren’t cat or dog people so we didn’t have many options. We had talked about getting an aquarium with fish. I wanted to do a small one with a few fish but hubster wanted one of those huge aquariums that would hold a ton of fish. It was a good idea since E likes to look at fish but I didn’t want to do all the cleaning (I can smell the stank just thinking about it).

My sister had bought dwarf frogs for her classroom. Since school hasn’t started yet, they are in her kitchen. She watches E twice a week and she’s been telling me how much he loves them. They are so easy to care for, too. You feed them twice a week and clean the aquarium twice a year. How easy is that?

I spent a lot of time with E this weekend since the hubster was working on the bathroom (more on that later). He was really good so I thought I would take him to get him his frogs. When we got to the store, he got really excited when he saw them. He was laughing and pointing at them. I let him ‘”pick” the ones he wanted and off we went with our new additions.

Once we got home, E was showing his frogs off to the hubster. He was talking to them and would giggle everytime they started jumping. He’s obssessed with these things. That night before bed, he blew kisses and waved bye to the frogs. First thing the next morning, he had to go make sure they were still there.

I think I made a smart choice on this one. 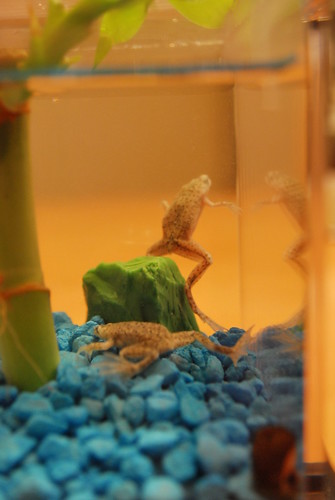