I knew posting that picture of E in his big boy bed would somehow jinx us.

I had just fallen asleep and what do I hear? My name. Not being called out quietly. Oh no, that would have been too easy. Instead, we were screaming out as if someone or something was hurting us.

The hubster being the oh so loving and caring husband that he is tried to go in to comfort E and get him back to sleep. But that wasn’t good enough. Oh no, he needed his mommy. And he let everyone know about it.

I gave up and went in. He immediately wanted me to hold him. He was sobbing and shaking.  What on earth happened? I still don’t know.

He somehow conned his way into our bed. I knew we were in for a long night. First, he wanted to play. Then, he was crying to watch a show. Then he was screaming that his ear hurt. Well, that would make sense right? That’s what woke him up. I thought that then, but now I’m convinced it was all an act.

Finally, he settled down and passed out in between us.

As both of my boys were sleeping, snoring in tandem, it reminded me about E’s early weeks when we co-slept. Pretty soon I would have another little man to share my bed with. Another little snuggle bug to take up half the bed. And I just know that there will be some nights that E will want in on the action as well. 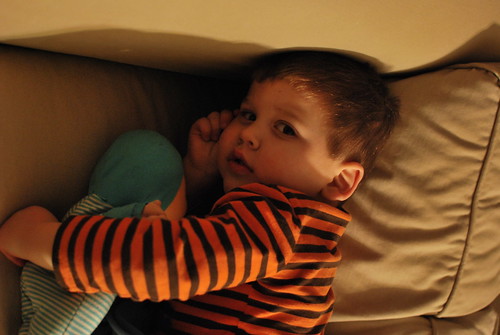