On Monday, I went to the Phillies Phestival. I had agreed to go with Renee to this over a month ago. At first, we were going after work. Then she asked, if I could take a half a day. I was under the impression it was an all day event.

So, I sucked it up and off we went. At least it was nice out.

We got down to the stadium and met up with her friend, Michelle, who was already in line. We jumped in with her and we had a pretty decent spot. 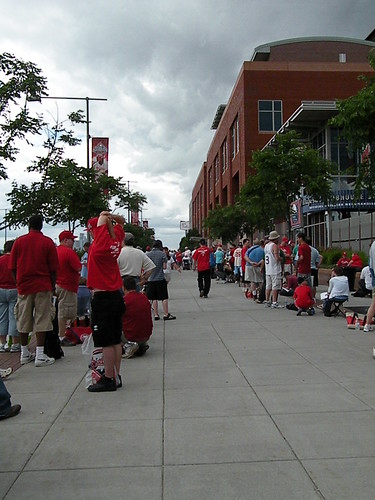 I was getting a little antsy so I ran into the Majestic store (which thankfully was open). I walked around not thinking I would buy anything (since most things are overpriced). I headed up to Phanatic Attic thinking I could get a little Phanatic for E. Yeah, not happening. The teeny, tiny one was $20!! I did pick up a Phanatic book for him that was all about the Phanatic moving from the Vet to the Park. Pretty cute! I even managed to find a t-shirt for myself!

That killed about 20 minutes and back in line I went.

As we were standing around chatting about tattoos, child birth, and other random things, we saw these angry clouds. 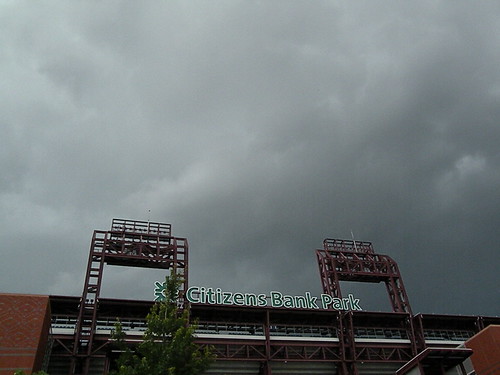 I kept saying that the clouds would pass and we would not be rained on. And, once again, Stephadamus was correct. These nice pretty clouds soon joined us. 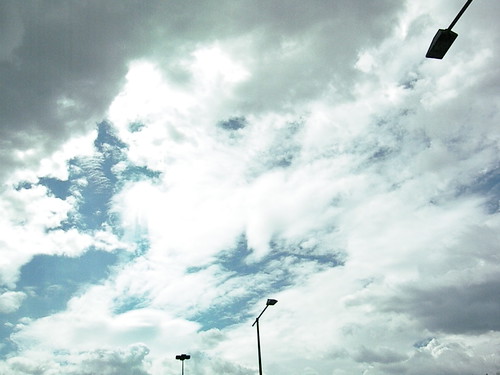 While we were waiting, the photog in me came out. I have a thing for architecture these days and there was so much to shoot. I’m sure people thought that I was nuts with the shots I was taking. 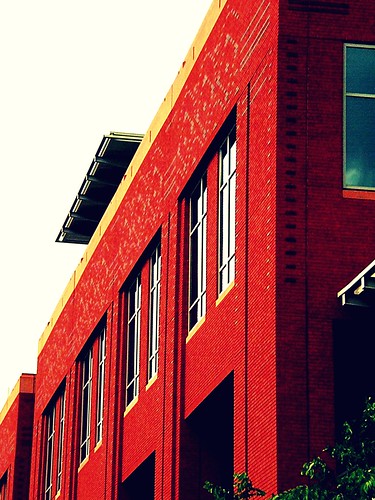 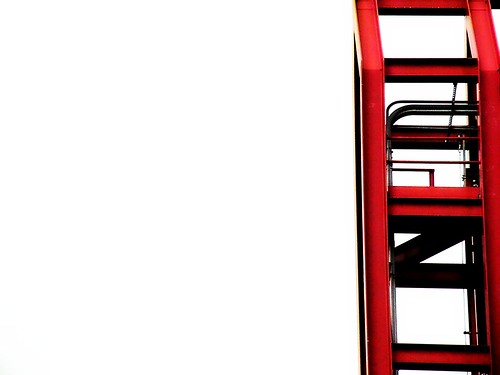 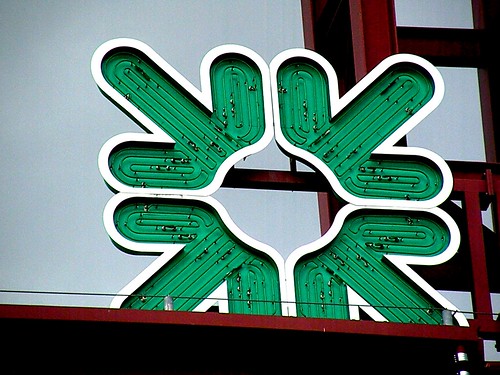 Before we knew it, the line started to move and we were off to exchange our tickets.

Here’s where it gets a little embarrassing. I think I know like 2 players on the Phillies, seriously (and this will become even more apparent in a little while). I was just going to help Renee out and get the autographs she wanted and to have fun. But I kept forgetting who I had to exchange my ticket for!

After we exchanged our tickets, we got in the even bigger line to get into the park. Once inside, we jumped in line to get our picture taken with Brad Lidge. Michelle was being all cute sitting on the ground, I just had to snap her picture! 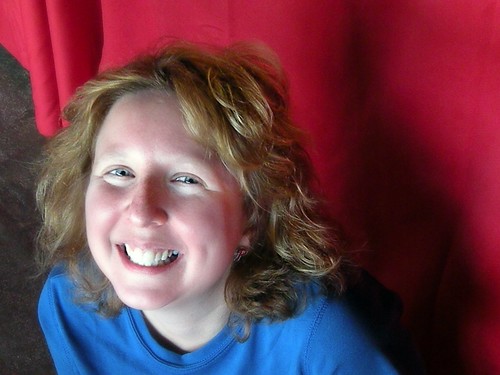 While we were waiting in line, we heard a horn honking. That can only mean one thing: the Phanatic was coming! He came right down our line. I was so excited (anyone who’s been to a game with me knows that he’s basically the only reason why I go)! My excitement quickly went away. Right when he was just about to us, he hopped the line and went away. Boo! 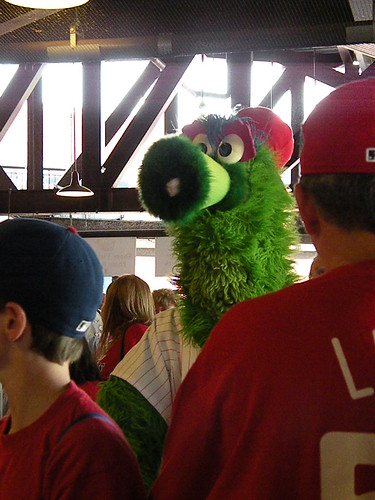 The excitement for the Phanatic was soon replaced with the excitement to meet the players. First out was Shane Victorino. What a cutie! And what a nice guy. He was cracking jokes and was so cute when the little ones came up to take pictures with him. 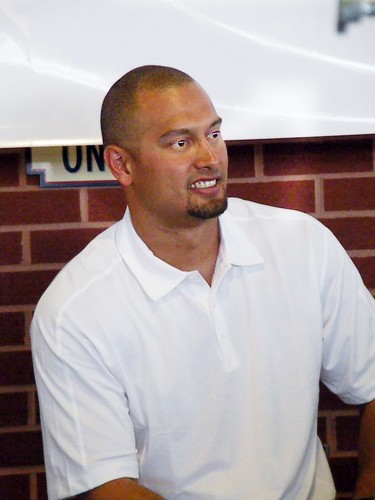 Next up, Brad Lidge. Everyone was so excited for him and now I know why. See for yourself. 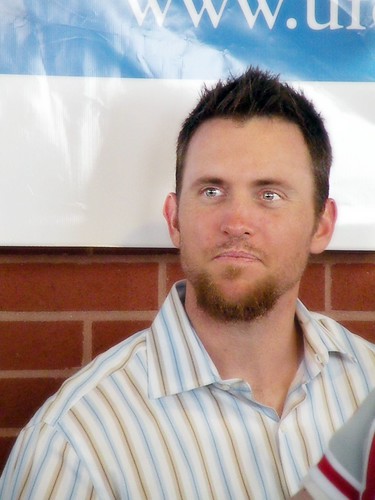 Here’s Renee, Michelle and her fam with the man. 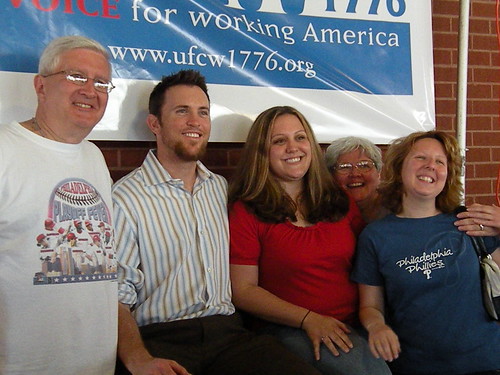 After pictures, it was time to split up and get autographs. I had my tickets, my stuff to get autographed, I was all set. I first got in line for Jaime Moyer. That one was easy peasy. The line moved fast and he was a nice guy. 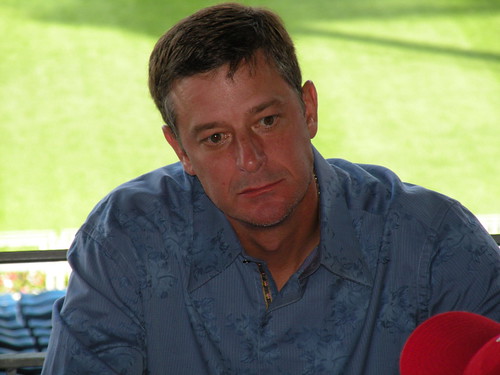 Next, I was off to get J.C. Romero and Antonio Bastardo. I was waiting in a very slow line (but it wasn’t too long) so I started snapping away. The park was just so interesting since it was empty. I mean, when else will I ever get to take pictures of an empty ball field. 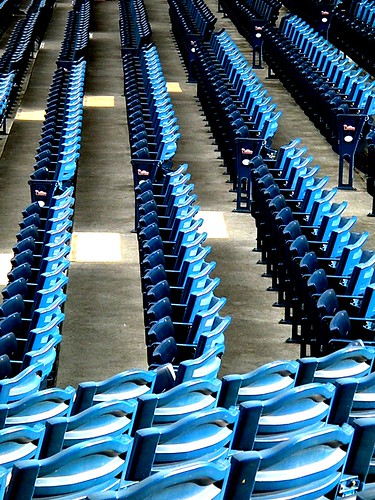 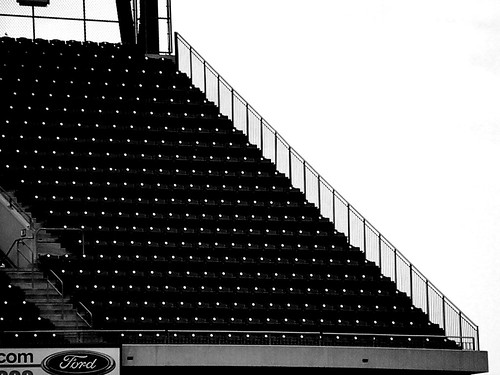 When I finally put the camera down and we began to get closer to the front of the line, it dawned on me. I don’t know who’s who. I looked at the picture on the card that I was to get signed but that didn’t really help me. I didn’t want to look like a jerk when I got up there and just “eeny meeny miny mo”- it. I tried calling Renee but she didn’t hear her phone. I called the hubster and he laughed at me, saying “How am I supposed to know. I’m not there.”

Out of desperation, I tapped the shoulder of the guy in front of me. When he turned around, I thought I was having a celebrity sighting. He looked just like Jason Mraz. But, alas, he was not. Anywho, I told him that I needed to ask him something and that it was going to be pretty stupid. So I asked. And he laughed. He told me, “It’s the first guy.” Ok, great. Now I know who it is. When we got to the front of the line, Mr. Jason Mraz-look alike turned to me and said “Now don’t forget it. It’s the second guy.” Wha?! He told me the first guy! He said he was just joking and was testing me.

Oh but it doesn’t end there!

I get up to J.C. Romero and he starts making small talk by saying “I’m so tired.” Excuse me buddy, you’re tired?! And I said just that. I made sure to remind him that I had been standing in line since 2:30 and all he was doing was sitting there looking pretty and signing his name. He chuckled and said “I guess you’re right. I’m not that tired.” It got a pretty good laugh from the crowd that was standing around.

My next task was to find Renee. Since she wasn’t answering the eleventy billion phone calls I was making, I just started walking. I eventually found her. She then drug me down to get a picture with the coach, Charlie Manuel. I only went so I could walk on the field and get some good shots. 🙂 Michelle was pretty funny. She made us all touch the grass, cause you know, they walk on the grass and all. 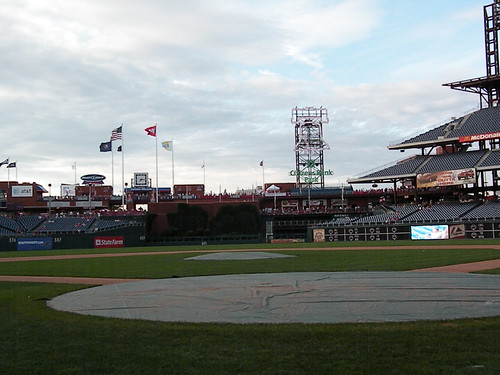 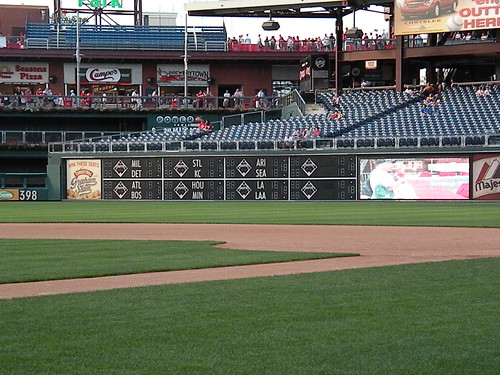 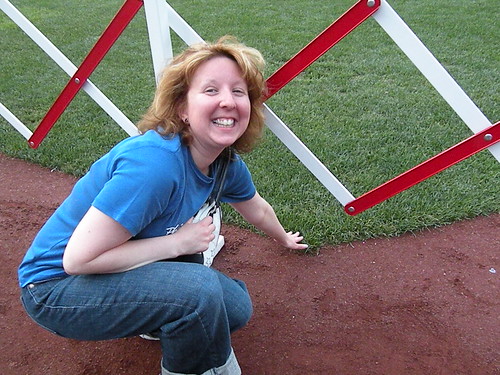 When we got done on the field, it was pretty much time to go. After watching Renee spend her life savings on grab bags, we were off to search for food. Of course, nothing was open. We decided to head on over to Benny the Bum’s with Michelle’s family. Hands down, one of the best chicken quesadillas I have ever had (or maybe I was just really, really hungry).

I didn’t get home until much later than expected but it was worth it. Nothing a little coffee can’t fix!