You are here: Home / Home & Family / Spillin’ the Beans
0shares

Since the cat is out of the bag family-wise, I might as well let you all in on the secret.

But let me backtrack for a minute.

Saturday night, we were talking to E about the baby. I was at the hospital that morning {more on that later} and I think it really scared E. He didn’t want me to leave him and you could tell he knew something was up. So we sat down with him to talk about the baby and let him know that Mommy was okay.

Part of that conversation was talking about the baby’s name. Usually when you ask him what “the brother’s” name is he would respond with “Barracuda”. We’ve been telling him what the baby’s “real” name is since we agreed on it. He knew what the name was but I guess he preferred Barracuda.

But something clicked Saturday night.

He wouldn’t stop saying the name. And it sounds absolutely adorable the way he says it.

Flash forward to Mother’s Day Brunch. Whenever we are all together, my family likes to guilt me into telling them the baby’s name. Let me tell you it was fun torturing them all this time!

And then it happened. My sister asked E what his brother’s name was.

And she bribed him with chocolate cake.

He told her {What can I say, he’s my child. He can’t pass up chocolate cake!}.

But it was so loud in the restaurant she didn’t hear him.

So she asked him again.

He was getting annoyed with her constant asking that he finally shouted “BENNIE THE BULL!”.

It still took her a minute to figure it out.

Yes folks, baby no name’s name is Benjamin aka Ben aka Bennie aka Bennie the Bull. 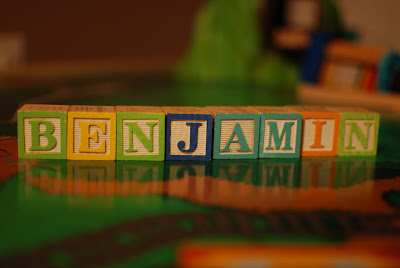 E refuses to call him Benjamin. He will only call him Bennie and, I know I have said it before, but it’s the cutest thing I have ever heard.

I can’t wait for the two of them to meet!

Have you clicked today?