You are here: Home / Home & Family / The Story of Us
0shares

I saw this meme over at The Musings of the Mrs. I thought this was a great way for you, my readers, to get to know me and the hubster better. 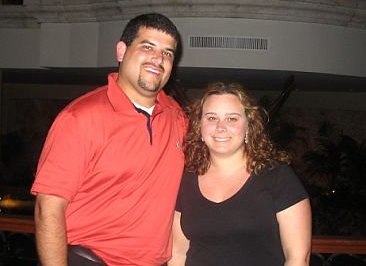 What are your middle names?
Me: Don’t have one. I was a preemie and I was lucky to leave the hospital with a name!
Hubster: Patrick (after his father)

How long did you know each other before you started dating?
We didn’t! We were set up on a blind date.

Who asked whom out?
Neither, I friend set us up on a blind date.

Whose siblings do you see the most?
I think we see them equally as much. Family is important to us and we try to see each other at least once a week.

Which situation is the hardest on you as a couple?
Cleaning. I hate it, he insists on it. It’s like living with my father. He likes to say that we live in squalor (far from it). It drives me crazy!

Are you from the same home town?
No. The hubster is actually from Pittsburgh (hence why we visit there often).

Who is smarter?
If you asked the hubster, he would say he is. But don’t let him fool you! I did score higher on an IQ test!

Who is the most sensitive?
That would be me, without a doubt. I try to put on a brave face and tough-girl exterior. But on the inside, I’m a big mush ball.

Where do you eat out most as a couple?
Ruby Tuesday. Love their burgers, especially the sliders. And you can’t beat the salad bar!

Where is the furthest you two have traveled together as a couple?
California. We went with the hubster’s family and stayed for a week. We did a lot of sight-seeing and had a great time!

Who has the craziest exes?
Hands down that would be me!

Who has the worst temper?
ME!!!!!!! And I’m not ashamed to admit it. It looks like this lovely trait was passed on to E.

Who does the cooking?
I do. The only cooking that the hubster takes care of is grilling. I’m ascared of the grill.

Who is the neat-freak?
He is. And it’s annoying.

Who is more stubborn?
I’m sure he would say that it is me, but I’m here to tell you it is most definitely him.

Who hogs the bed?
Me. I don’t mean to! I don’t even mean to. But of course, I am always told about how I steal covers and shove him off the bed.

Who wakes up earlier?
He does. Hubster needs to get a head start on traffic so he leaves pretty early to avoid it.

Where was your first date?
Dinner and a movie

Who is more jealous?
Hmmm….me!

How long did it take to get serious?
I would say about 6 months.

Who eats more?
Me. I have a horrible sweet tooth and love to snack. It’s my downfall.

Who does the laundry?
He does. He can’t stand the way that I fold his laundry. Which is fine by me, cause I hate to do it.

Who drives when you are together?
Hubster usually does the driving. Unless it’s at night and he forgot his glasses. Then I get the privilege.

Now it’s your turn, dear readers! Answer some or all of the questions about your significant other and link your blog in the comments.

And now you know a little bit more about me!