You are here: Home / Uncategorized / Ten Years Ago…
0shares

I can not believe that this Sunday is the tenth anniversary of September 11th. It doesn’t seem like long ago but, yet, at the same time feels like it happened so far back in the past.

September 11, 2001 – I was a sophomore in college. Just doing my thing and not having a care in the world. I remember my 8 am class let out early and I made it back to the hubster’s {then boyfriend’s} apartment. I flipped Regis & Kelly on as the second plane hit.

When he did return, the hubster really had no idea what was going on. He had heard some rumors while walking back from class but hadn’t been in front of a television since before 8 am. He came home to me sitting on the bed, eyes staring at the screen, and sobbing. He, honestly, had no idea. I managed to say “The towers…they’re gone. People just died on tv. It’s all gone.” He quickly hopped on the internet and caught up on what was going on. I just sat there in disbelief. I didn’t know what to do. I didn’t know what to say. What was going on?

December 2001 – My father decided that we lived entirely too close to New York City to not make the drive up and pay our respect. Everyone {my mom, my dad, my sister and her husband, my grandfather and his girlfriend, and the hubster and I} made the two hour car ride to the city. We took the ferry over. I remember the eerie feeling that overcame us as we started walking towards what was the World Trade Center.

I have never heard the city so quiet. No cars. No honking. No yelling. Nothing. Silence.

As if to respect the silence, we didn’t talk for what seemed like ages. We finally reached Battery Park. We could still parts of the buildings on fire. We saw huge pieces of steel, twisted and mangled. We could see the victim’s families being ushered into a special viewing area.

As we just stood there, I noticed my dad wasn’t with the group. I found him down by the river. Just staring. He tried to avoid me and wouldn’t turn to look at me. When I finally got him to acknowledge I was standing there, I saw the tears streaming down his face. That is the first {and last} time I have ever seen my dad cry. That is when it all hit me. Don’t get me wrong. I knew what impact this all had on our country but to see my dad standing in the middle of this wreckage crying, well, it hit me hard.

As we returned back to the group, I found my sister chatting with a police officer. He told us that he had been down at Ground Zero since Day 1. He was there every single day. Just waiting and hoping and doing whatever he could to help. I had the irresistible urge to hug him. So I asked him if I could. “Why?” he asked, “I’m just doing my job.” I didn’t even respond. I threw my arms around him and gave him the tightest hug I have ever given a stranger. And he hugged me back. He needed that hug. We needed that hug.

As we walked the perimeter of Ground Zero, I found myself peeking into the windows of the restaurants that lined the area. Place settings were laid out that morning in preparation for the lunch rush. They hadn’t been touched in three months. They were perfect as if for a movie set. Those buildings that were not left untouched were covered in dust. We knew people ran into those buildings to take shelter. And I prayed {which I very rarely do} that those who hid in those stores were now home safe with their loved ones.

Today – It’s rare that I don’t head down to Ground Zero when I am in the city. It’s just something that I have to do. I usually start my day off down there. I walk around the perimeter. I chat with others who there for the same reason that I am. I walk inside to check out the memorial plans {which are amazing!}. I sit down by the water at Battery Park and just stare and think.

It’s a very humbling experience for me. Something that I need at times. It helps put things in perspective. Although, they are making great strides down at Ground Zero and it looks like nothing like what it did back in December 2001, I will never forget what I saw. 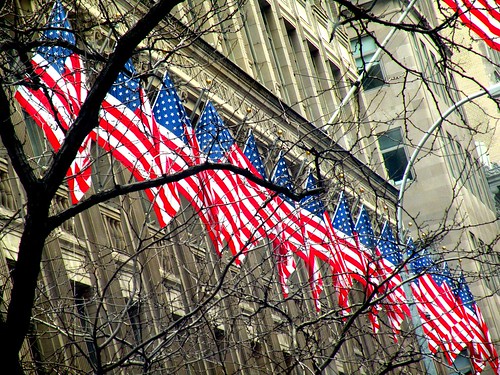