You are here: Home / Home & Family / The House That E Built.
0shares

Back when we had that pesky little Irene pass through, we were dreading about having to find things to keep E preoccupied if we lost power {which we, thankfully, never did}. The hubster had bought a wet vac that night and wouldn’t you know the best thing came with that wet vac.

A rather large box.

As soon as the wet vac was out of that box, E was right in there. I then got the brillant idea to turn that box into a little clubhouse. E jumped right on that. He informed me that it needed a door, a window, and a pitched roof {like Blue’s Clues to be exact}.

Ask and you shall receive.

We not only “built” a house. We also painted it. 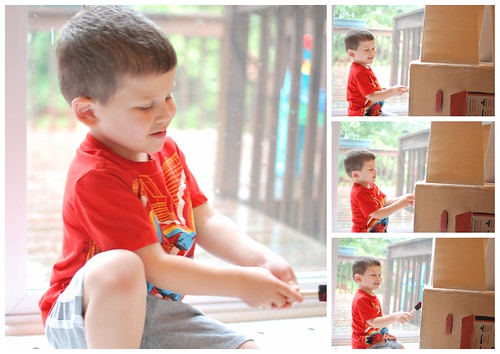 Two weeks after we assembled the house it was still there. Every time I thought it was safe to put it out for the trash truck, he would insist on playing with it. It was as if he could sniff out that I was itching to throw it out.

Eventually the clubhouse bit the dust but the memory of working on it together has not.