When it comes to discipline and setting expectations for the kids, we have implemented a few strategies.

The pom pom jar is our latest technique. We started this technique after Ethan’s teacher started it at school. We made a big deal about the pom pom jar. I took Ethan to the craft store so he could pick out the pom poms and stickers to decorate his jar.

We chose three sizes for our pom poms: small, medium, and large. We use the different sizes based on what we are rewarding. Clean your room? Get a large pom pom. Clear your plate after a meal? Get a small one.

So far this reward system has been working well. Of course, we didn’t leave Ben out. He has his own jar as well. Even though, he’s too young to fully understand the concept, he gets really excited when he gets to put a pom pom in his jar. And on the other hand, gets upset when he doesn’t.

So what happens when the jar is full? You get your reward! Ethan had the greatest plan every for his reward.

He wanted to work towards getting a pet.

But so not happening.

Instead, I stumbled on Busy Kids = Happy Mom‘s post about her Pom Pom Jar. When the jar is filled, she has coupons for the kids to pick out. Love this idea and, of course, I had to l borrow it. 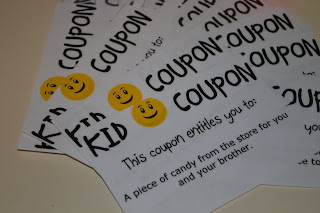 I made the following coupons: family movie night, sleep over in the living room {Ethan loves doing this}, you pick dinner, family bowling night, etc. When the jar is full,  Ethan {or Ben} can chose a coupon. The jar gets emptied and we start all over again!

What behavior reward systems work at your house?