I can not believe Christmas is over. All that preparation. All the stress. And in the blink of an eye, it’s over. Just like that.

But it’s all worth it right?

E was so excited leading up to Christmas morning. All he talked about was Santa and what he was bringing him. On Christmas Eve, he went to bed early {a great feat these days} after leaving out some cookies {sorry, no milk Santa. We were fresh out!}.

I thought for sure he would get up early. WRONG! We were the ones up early. And we patiently laid in bed waiting for him. {I know that will change soon!}.

When he finally got out of bed, we headed downstairs. The first words out of his mouth was “Look at that over there!” He spotted the train table. One would think that he would have ran right over and played with it. But, no. Not my child. He wanted to open the front door and turn on his “guyses” {Santa and Frosty}. It wasn’t until we pointed out the table again that he made a bee line for it. 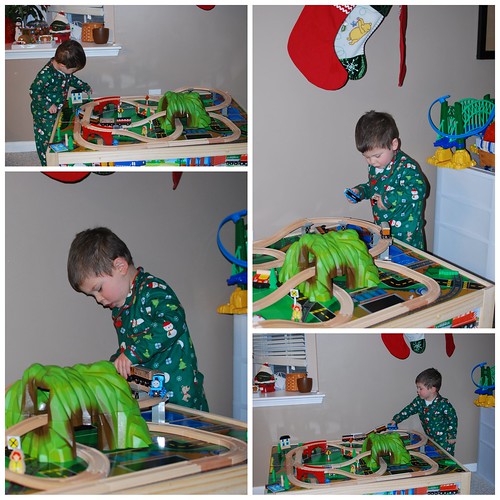 He played with that table for 15 minutes. Forget all the presents still waiting under the tree. He didn’t care. We had to tear him away from it just to open the rest {with breaks to play with the trains in between}.

By the time he was done, our living room looked like a Toys’ R Us.

And we weren’t even done.

We had 2 more stops left {the in-law’s and my parents}.

The kiddo made out great this Christmas. Tons of new toys, new clothes, and new books. He is having a blast going from toy to toy and he can’t make up his mind which is his favorite.

But I think it’s the train table. He would spend the entire day playing with that thing.

Santa did a great job this year!